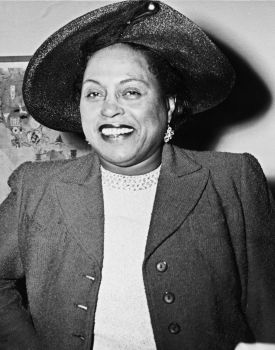 “I would come home with five As and a B,” Barbara Jordan told Molly Ivins of the Texas Observer, “and my father would say, “Why do you have a B?” She wanted to please her father, to meet and even exceed his standards; but she wanted to be more than a music teacher. “I always wanted to be something unusual,” she says, “I would never be content with being run of the mill, I was thinking about being a pharmacist, but then I asked myself, “Whoever heard of an outstanding pharmacist?” When she was in the tenth grade at Phyllis Wheatley High School, a Chicago lawyer named Edith Sampson addressed the Career Day assembly. Sampson was crisp, competent, confident. Then and there, Barbara Jordan decided that was what she was going to be. At first, her father told a teacher who encouraged this ambition to “stay out of his family’s affairs”; that the law was no profession for a woman. But he came to encourage her “to do whatever I thought I could.” (Courtesy of Texas Monthly, October 1976)